Ok, Back to Parables for the last four weeks of the church year. All of these four parables have been classified as “Parables of Judgment.”  And, to make matters more complex, this week we have the first of two Wedding Banquet parables.  So – wedding banquet/judgment = all rolled up into one parable.
Read the text of the parable here: Matthew 22:1-14

This parable comes in the middle of Jesus’ contentious debates with the Pharisees, Sadducees, Herodians and others who are trying to undermine Jesus so they can get eliminate this troublemaker once and for all.  But it is not so easy.  Jesus is clever and quick witted and, not only that, but he knows the law backwards and forwards.  Besting Jesus in a debate is not working out so well.  And to make matters worse Jesus has picked up a large crowd of followers who are hanging on every word! This raises the stakes as well and also threatens riot.  So into this highly charged atmosphere Jesus tells a parable about a King who has invited all of the nobility to the wedding feast of his only Son, but those who were invited reject the invitation twice! And the 2nd time they mistreat the servants, even to the point of killing some of them! So, the King sends retribution against them and sends his servants out to the highways, the town squares, the streets of the city to round up everyone else – “the good and the bad” – who are invited in place of the original guests.  It does not take a brilliant exegetical mind to see that Jesus has cast his opponents in the role of the 1st invitees who have rejected the invitation and murdered the servants (Jesus and the prophets!).
First a couple of historical notes: To be invited to the wedding of the King’s son was the greatest honor a citizen could have expected to receive.  If such an invitation arrived it was a circle the date and do not miss this event.  In a poor agrarian society the regular diet would have consisted of mostly grains and bread, olives, leeks and so on.  Meat was saved for special occasions – notably religious festivals and weddings! That these 1st recipients would have refused for rather mundane things would have provided some chuckles. Who in their right mind would refuse an invitation to a wedding feast of a King where there would be free food (meat!)?  But the sending of a 2nd invitation would have also brought nods of recognition.  Sometimes an invitation would have been put aside in order to wait to see who else is going to be there.  After all, if you are going to a major society event you want to know that the celebrities and big names in the society are actually going to be there. The beating and murder of the servants bearing the 2nd invitation would have provided the shock. And the retribution that follows would not have raised eyebrows.  Of course the King had to respond to such an affront to his honor.  But equally shocking would have been the King’s extending the invitation to everyone else –people of a lower social class – both the good and the bad!
So the King fills up the hall with guests – the poor, the outcasts: losers of various stripes and flavors. And wedding garments were provided.  There was a superstition that was very common in the entire Mediterranean region that concerned itself with a jealous or envious wedding guest putting a curse on the new couple by means of an “evil eye.”  To counter this danger the host would provide special wedding garments that could disarm the curse and protect the couple.  So when the King finds a guest who is not wearing the wedding garment that had been provided it is seen as more than just a fashion faux pas. This was an affront, an insult and a threat. No wonder the King has this guest thrown out into the outer darkness (the “Suburbs of Hell” as one writer calls it).
In closing some thoughts about the application of this parable.  It is on the one hand a judgment parable.  We cannot pretend that it is not simply because we don’t like to think of the judgment side of God.  But note, first of all the original invitees brought the judgment upon themselves. The King does not send violence after the first rejection instead he sends another invitation.  He really wants these folks to come to the Banquet.  It is only after they beat and murder the servants that they bring this judgment down upon themselves. 2nd, it is the King who is in charge of judgment.  The King, who went out of his way to invite folks to the great wedding banquet, and who opens up the invitation to all.  So, if we begin to see ourselves as the invitees we also need to recognize that whatever judgment may be in the future is up to God and is not delegated to us!
On the other hand, this is a parable to Grace. The King really wants these folks to come to the wedding banquet and goes out of his way to send two invitations to try to get them to come and then when rejected the King extends the invitation to all – the good and the bad. The only expectation is that we accept the invitation, that we humbly put our self-centered need to be in the center of our universe aside so that we can put on the white garment of Baptism and come to the banquet. And guess what? It is free. The gift of God’s love, grace, forgiveness is free. The garment is even free, the food at the banquet is free.  What a deal!!! The invitation has arrived. How will you respond? 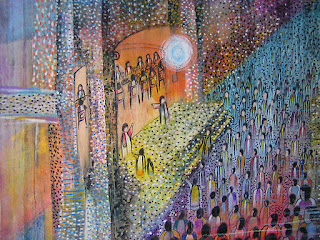