The End is the Beginning
We have come to the end.  The visions have faded away and we find ourselves in the dark cave in Patmos where John is writing the final words of his letter.  He has taken us on quite an adventure, we have seen fantastical visions but now he returns to the beginning, to where he started and again confronts his readers: Jesus is coming soon!  What difference does that make to you, how you live your lives and how you relate to others?
This prompts another important question: do you believe it?  Do you believe that Jesus is coming soon?  John wrote this sometime around the year AD 100 and we are now in the year AD 2013.  That is almost 2000 years ago and Jesus has not come yet.  At least, not in the way we expect – on the clouds in glory.  But yet, Jesus comes to us each and every day.  One of the points that John makes over and over again in Revelation is that Christ is present with us in the midst of our lives and that Jesus IS here now working to bring about the Kingdom of God on earth.  The problem is that too often we are like the disciples in the Ascension story from Acts 1:1-11.  We spend too much time gazing into the sky looking for Jesus to come dramatically in glory, distracted by our own pre-conceptions of visions of terror, apocalyptic destruction, violence and rapture.  When in fact Jesus is standing right next to us loving us. Jesus is embracing us in our struggles and griefs.  Jesus’ constant presence with us is not dramatic, it is not violent, it is not accompanied by terror or trumpets or angels.  Jesus is present with us every moment of every day in love and grace.  I think we too need to be tapped on the shoulder, like the Angels do to the disciples, in order to remind us to lower our gaze, give up our pre-conceptions, accept God’s love and get to work.  For Jesus’ presence in the world is affected through the saints – through you and me.
In many ways the Book of Revelation brings us full circle.  The Bible begins with the creation account in the Book of Genesis, and the Bible ends with the Book of Revelation focusing on God’s work of re-creation.  Both creation accounts are centered right here on earth.  The idea that there is some other place called heaven to which we would be raptured is completely foreign to the Bible and to the Book of Revelation in particular.  There is no rapture.  There is no separate, distant place.  Redemption and salvation and re-creation are centered here upon the earth that God has made and that God loves passionately.
In the Gospels Jesus is the Messiah, the Son of God who is born naturally in very humble and poor circumstances and who dies violently humiliated on a cross.  This is not really the Messiah everyone was looking for.  And in Revelation, where we expect a powerful warrior, a strong and victorious lion instead we get a defeated Lamb who wears robes soaked in His own blood and who fights only with the creative Word that comes from his mouth.
In the letters that Paul sends to many of the same congregations to whom John of Patmos is writing, Paul stresses over and over again that God’s love is available to ALL.  That God reaches out to us and brings us into His amazing love NOT because we obey all the rules, not because we are good people, not even because we believe all the right things – but based solely and completely on God’s unconditional grace.  In the Book of Revelation the vision of the New Jerusalem has 12 great gates that stand open eternally inviting ALL to come and enter into God’s incredible loving presence.  The nations will be drawn to the city and will enter for God invites everyone unconditionally to enter in.  Those who remain outside remain outside because they have chosen to remain outside.  In the end, according to Revelation, it is the surprising and amazing love and grace of God that triumphs.  There is no timeline in Revelation.  The visions themselves are not even sequential.  In fact there is a repetitive aspect to them.  Why? Because the point is to invite all to enter through the gates and accept the gift of the love which God offers to us through the Lamb, Jesus the Christ.
Finally, the Book of Revelation is a book of worship.  Worship is woven into the very fabric of this book.  Just like Revelation is not just about ME, but is rather about the community of believers, ultimately worship is also not about ME.  It is not about making ME feel good and spiritual.  Worship is a community event designed to feed and strengthen believers in faith through Word and Sacrament and then to send this community back into the world ready to bear Christ’s loving and healing presence into all the world in order to do the work of the Kingdom.  As we leave the Book of Revelation, as we leave John in that cave on Patmos we are again confronted with the ultimate question which lay at the heart of the Book of Revelation, which curiously enough is also the very same question that sends us forth weekly from worship – “What difference does it make?  What difference does it make that you have been claimed by Christ in your Baptism?  What difference does your faith make in the way you live your lives, manage your relationships and set your priorities?”  Perhaps, as the angels is Acts say to the disciples, it is time for us to lower our gaze, to look seriously at this creation that God has made and given us responsibility for and get to work! 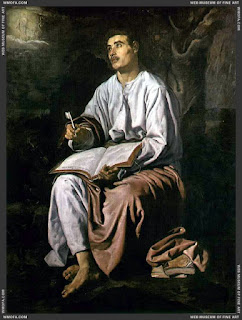 Painting by Velazquez Diego (1599-1660)
An audio recording of this sermon as well as all of the sermons from the series can be found at the Wartburg Parish website, media page.

Posted by Pastor S. Blake Duncan at 12:10 PM No comments:

Reflections on the Text - Revelation 21 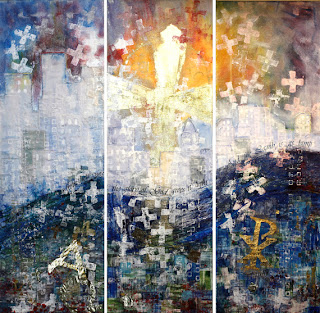 Posted by Pastor S. Blake Duncan at 1:27 PM No comments: