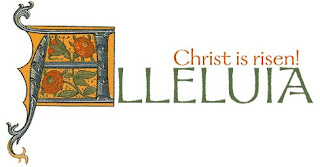 I have posted the audio of my Easter sermon on the Wartburg Parish website - http://wartburgparish.com/#/media
The title is "No!/Yes!" - Look for the sermon dated 3/31/13
Have a blessed Easter!
Posted by Pastor S. Blake Duncan at 12:37 PM No comments:

The Book of Revelation 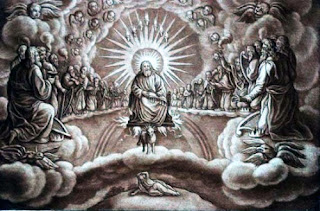 Posted by Pastor S. Blake Duncan at 11:26 AM No comments:

Mary: Model Disciple
When you hear the word disciple what, or whom do you think of?  My guess is that you probably think of those 12 men that Jesus called to be his followers in the Gospels.  The most prominent of these are Peter, John, James, Andrew, Matthew, Thomas and Judas. Because of this we could almost get the idea that a disciple was someone who had a special status in relation to Jesus and that this select group was limited in number (12 only) and that only men were allowed.
During the time of Jesus there were many travelling Rabbis who would attract students (the Greek word – mathetes – translated as disciple actually means student).  There were several different classes of students. The first group were the beginners.  This group tended to be a larger group of young men, but after a certain period of time, and after covering specific material this group would reduced substantially to a much smaller group of more serious students.  The others would return to their homes and villages with the basic knowledge they had gained from the teacher and resume their lives.  The advanced smaller group would begin a very rigorous study.  They might stay with the teacher for years and would often assist him with teaching the new novices.  Finally, there was one final group, those who showed particular brilliance and who would be on a track to become a Rabbi themselves.  There were very few of these, sometimes only one every few years.
This is the system that was in place when Jesus was a traveling Rabbi in the Galilee.  Jesus is both a part of this system and alters it in a couple significant ways.  If you read the Gospels carefully you will notice that at any given time Jesus is always attracting large crowds to listen to him teach.  Not only that, but he has a larger group of followers that are always with him.  This is particularly the case in the Gospel of Luke.  In other words, there is a large group of disciples/students that follow Jesus throughout his ministry.  This larger group is like the beginners-novice group and includes the 12, but is not limited to them. The 12 serve as the inner core of disciples/students that are like the more advanced group above.  There seem to be no disciples/students out of either of these groups that Jesus has promoted to the future Rabbi track (thought one might argue that Peter, James, John and possibly Judas might qualify.)
So the Rich Young Ruler petitions Jesus to become a disciple/student and then decides it will be too demanding.  (Luke 18:18-30) Others get picked up here and there.  After the crucifixion the famous and wonderful story of the disciples on the road to Emmaus (Luke 24:13-27), tells the story of 2 students who encounter Jesus, one who’s name is Cleopas.  These two are not part of the inner 12, but they are clearly identified as disciples.
But perhaps the most radical difference between Jesus and other Rabbis of his age was the fact that Jesus welcomed women to be disciples/students.  While the inner 12 were men, the larger group of Jesus disciples/students included many women, some of whom had some means and provided financial support.  This group included Mary Magdalene and Jesus’ mother Mary seems to be a part of this group as well.  Then we have Joanna, Salome (not THAT Salome, a different Salome – see Luke 24:10) Martha and Mary (the sister of Martha).   In the famous passage from Luke, Mary is pictured listening at the feet of the teacher - the position of a student/disciple.  Martha’s objections to this are completely understandable in the context of the times: women are not students in 1st century Palestine!  Jesus’ response makes it clear that this is something that he is changing and that women are students of his.  (Luke 10:38-42)
Not only is it significant that Jesus welcomed women as disciples/students but it is also significant that it is these women disciples who are often models of discipleship.  The men had lots of baggage, they did not understand where Jesus was going and what he was doing, they often jostled for position and tried to manipulate Jesus.  In the Gospel of Mark, Jesus is particularly harsh with his inner 12.  But it is the women who consistently seem to “get it.”  It is the women who do not flee and hide after the arrest but follow Jesus to the cross (Matthew 27:55); it is the women who come to the tomb early in the morning and are the first witnesses of the resurrection (Luke 24, Mark 16, Matthew 28).  And in our Gospel story from today from John 12 is it a woman – Mary (sister of Martha) who anoints Jesus for kingship and for burial, who washes his feet with her hair and is thus a model of discipleship.  In chapter 13 Jesus will do the exact same thing for his disciples and they (represented by Peter, their spokesman) will object (John 13:1-11).  But in chapter 12, Mary does it willingly on her own initiative.  She understands who Jesus is, what is about to happen and what it means to be a disciple/student of Jesus. She is ahead of the curve.  She gets it!
In this way is Mary a model for us.  For we too are called to be disciples/students of Jesus - to sit at his feet and learn; to sup with him; to give ourselves to him and to serve others in his name! 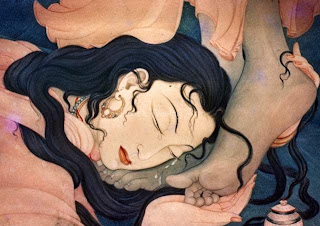 Posted by Pastor S. Blake Duncan at 4:12 PM No comments:

Pastor Eugene Peterson has published a new contemporary language translation of the bible (called "The Message") and in his work the verses above are translated like this: ‘I don’t think the way you think.  The way you work isn’t the way I work.’ ... ‘For as the sky soars high above the earth, so the way I work surpasses the way you work, and the way I think is beyond the way you think.’”  Think about this for a minute.  If God is truly God, that is if we really believe that God is the creator of heaven and earth, that God is incarnate in Jesus, that God is available to each and every one of us, then we have to acknowledge that God is ultimately outside our ability to understanding or even comprehend God’s immensity.  But yet, we Western Christians have a knack for shrinking God to our size and making God into an imitation of slightly more powerful human monarch.  This was true in times past and it is true today.
How many times have you heard other people speak for God? I hear it every day.  It comes mostly in the shape of powerful pastors or bishops or well-known Christians who represent themselves as so devout that they know the mind of God and can speak for God.  Now, I would not question their devotion, but it always strikes me as curious when the priorities and positions they claim that God holds are remarkably similar to their own positions and priorities.  And by far the worst are those who would ascribe hatred to God.  “God hates…. !” and you can fill in the blank.  This seems to be a popular position to take.  From the church in Kansas who is constantly protesting soldier’s and celebrity funerals spewing forth their hatred; to the mega-church with the outside billboard ascribing hatred to God, we see this way too often.  Maybe we can agree with some of their positions, maybe we can agree that “God hates evil” – but this immediately raises questions for me.  Even if we are convinced of our rightness – do we really have the authority to ascribe hatred to God?  Really?  And 2nd, the problem with a generic phrase like, “God hates evil,” is we don’t know how the speaker is defining the word “evil.”  Is the “evil” God hates just things or positions or people who are different than we are? Jesus says, “Judge not, lest you be judged.”
St. Paul writes in Romans, “all have sinned and fallen short of the glory of God.”  And he talks about himself as being evil and having evil desires and thoughts, and doing evil things, and then explains that this is the human condition.  But a human condition for whom Jesus died so that we might be forgiven.  When we start ascribing hatred to God we are really categorizing some people as being in with God and some as being out.  The phrase “God hates evil” then means “God hates you” or “God hates me.”  And hate is such a strong word.  But “God so loved the world that He sent His only Son…” to die for us so that we “might have life and have in abundantly.”
In our text from Isaiah, I am sure that the people of Israel felt as though God hated them.  After all, they had been driven into exile and their land and homes were destroyed.  But Isaiah calls to them – “Hey…. Come!” Come the banquet!  Come and receive God’s bounty and love – free and unconditional.  Come and receive God’s forgiveness – no strings.  In the Gospel text Jesus challenges the culturally accepted notion that when bad things happen it must mean God is displeased and that those who are being punished are punished out of God’s wrath and hatred.  Jesus, says No, No, No!  And then tells them a parable about 2nd chances; and 3rd chances and 4th chances and so on.  God’s grace and love and forgiveness know no bounds!  After all God doesn’t think like we do – God’s ways are not our ways!
So, I want to suggest that we should retire the word “hate” especially as it refers to God.  God is not a hater – God is a lover.  And God calls us to be lovers.  So instead of being so quick to ascribe hatred to God, let’s ascribe love: God loves those who are outside the mainstream; God loves those who are different; those who no one else likes; those who are angry or damaged; God loves those who are struggling with abuse or addiction or rejection or loneliness; God loves those who are coming to grips with loss and change and grief and bitterness; God even loves those who are themselves haters.  And we can keep going – make your own list.  But start with the words God loves… God loves you; God loves me – unconditionally, without cost and without restrictions.
And how do I know?  How can I be so confident that God is a lover?  Well I look up there at the cross – the cross with Jesus, God’s Son hanging upon it and then I lower my gaze and I see a banquet that has been prepared for you and for me; a banquet of bread and wine; a banquet that is for everyone.  “Hey – everyone who thirsts, everyone who is hungry – Come – Come to the banquet of the Lord – given and shed FOR YOU!”