"The Good (Compassionate) Samaritan" - Luke 10 and Other Things

This past Sunday the lesson appointed was the Parable of the "Good Samaritan" from Luke 10. In my sermon I went through some of the basics, first about Parables in General:
1. They are all Parables of the Kingdom of God - they reflect God's Kingdom, which is why so many of them are about radical forgiveness, acceptance and grace.
2. They are about God - they are not morality tales for us.
3. They are an invitation for those of us who have been baptized and have been called to be citizen's of the Kingdom. How are we to live? How are we to relate to others - well, A man had two sons..." "A man was going from Jerusalem to Jericho..."

I also pointed out in my sermon that the Parables tend to be "pretty in your face" and radical. This is why the man who shows mercy is a despised Samaritan. Maybe Jesus, if he were telling this story today, would lift up an immigrant from Central America or a refugee. Does that offend you? Well, it should and it should cause you to think long and hard about your priorities and how you treat and are in with relationship with others. Jesus takes the question "who is my neighbor" and throws it in the dirt - he, she, those children locked in cages - they are your neighbors and how dare you "pass by on the other side."

After church, my wife Christine and I were discussing this parable and she had a wonderful insight. Here is her post from Facebook:
Responding to the ridiculous argument that these refugees and children are suffering because it is their own fault, Christine writes:

“Nor is "it's their own fault for coming here." Think of that guy who was stupid enough to travel the road from Jerusalem to Jericho alone. He recklessly put himself in danger and then got beaten, robbed, and left for dead. So, poor him, it was his own fault. But someone stopped to help him anyway, someone who didn't ask whether the guy deserved to have been beaten or deserved to be helped. Others looked away, didn't want to get their hands dirty. It's proverbially clear to us which of these responses is to be lauded. But many among us can't make the connection to what's happening at our borders today.”

My colleague Pr. Chris Repp has posted his terrific sermon and I commend it to you:
The Good Samaritan

My New Testament professor at seminary, years ago, pointed out one day as we studied the Synoptic Gospels that there are multiple references to Jesus reacting with "compassion" when he confronts human suffering (actually a quick count gives me 14 references spread over the Synopics - Matthew, Mark and Luke). But, he explained, that is way too controlled in English. The Greek word behind the English word "Compassion" is (in the case of Matthew 9:36 for example) esplagxvisthe - the root is splagx - which is the Greek word for intestines. Jesus was not just moved to compassion, as beautiful as that may be - "His guts were wrenched" as he experienced and entered into the reality of human suffering.
How is it that those who call themselves "Christians" - who claim to follow Jesus and who (supposedly) know that that means to live with the same values and priorities seem to not be able to find within their souls any kind of "compassion" for those who are suffering such incredible cruelty. How is it that they latch onto lame excuses, and try to justify these cruel and illegal actions with mindless justifications? How come their "guts aren't wrenched" to see children ripped from their families and caged in such inhuman conditions? How dare you continue to call yourself a "Christian?" 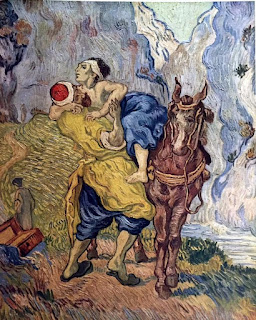