Read the text: St. Luke 2:1-20
Do Not Be Afraid
In those days a decree went out from Emperor Augustus that all the world should be registered. This was the first registration and was taken while Quirinius was governor of Syria. All went to their own towns to be registered.
Luke 1:1-3

And with those three simple sentences Luke sets the scene for the birth of Jesus, and it is a scene of darkness, hopelessness and fear.  Over the many years since the time of Jesus we have lost this sense of darkness, instead we tell a version of this story which has a faithful and dutiful holy couple, a clean stable, fresh and happy shepherds and devout kings.  But this version of the story misses the point in so many ways.  Luke wants us to understand that this was a difficult time and Mary and Joseph’s lives were hard, as were the lives of everyone else living in 1st century Palestine.  Indeed only a few years later the Romans would punish dissent by destroying the city of Sephorris, which was visible from Nazareth.  The heavy hand of Rome was resting upon this region and it was Quirinius’ job to maintain the Pax Romana – the “peace of Rome” which is imposed peace through violence.  Of course Joseph and everyone else headed off to wherever they are order to go for this tax census – they had no choice.

The shepherds had it particularly rough.  The life of a shepherd was a hard life.  Most people invested all of their wealth in livestock, so these sheep and goats would have been someone’s entire possessions.  These shepherds “abiding in the field, watching their flocks by night,” would have been hired hands.  The work was dirty and dangerous, especially at night.  Because of the dirtiness of the job shepherds were excluded from the Temple rituals and considered untouchables.  These were people on the margins – poor, destitute and excluded.  But these are the ones to whom the angels appear, for these shepherds represent all of those who sit in darkness and fear and for whom Christ comes.

The darkness, hopelessness and fear have not left us.  This past year has been a particularly dark year.  Just here at the close of 2014 we have climbing poverty rates in the US, even people who are employed at minimum wage cannot afford basics like food, clothing and shelter; protests in Ferguson, MO and around the country have raised again the issues of racism even as violence has erupted in some communities; ISIS and other extremist groups have been growing and have been notable for their brutality; at the same time there are simmering conflicts in places like Africa, Israel and Ukraine; and if that weren’t enough, North Korea has launched a cyber attack on a movie studio because they didn’t like a particular movie.  And this is at a national level, closer to home many of us have our own personal darkness with which we struggle.  These issues include dealing with grief and loss, illness, alcoholism, domestic abuse, depression and on and on.

It is into this world that the angels come and speak to us: Do not be afraid; for see—I am bringing you good news of great joy for all the people: to you is born this day in the city of David a Savior, who is the Messiah, the Lord.  It is into this world of darkness that God enters in Jesus in order to illumine from inside; it is into this world of hopelessness that God comes in Jesus to bring hope; it is into this world of fear that God comes bringing the gift of faith and it is into this world, with all its problems and darkness and struggle and sorrow and pain that God comes in Jesus, bringing comfort and joy and offering us peace.  Not the pax Romana kind of peace – no, Jesus brings to us a different kind of peace.  Jesus offers to us shalom – complete well-being and unity, light and life and hope.  The kind of peace that rejects violence as a solution, the kind of peace that doesn’t have to deny the darkness but rather accepts the reality of the darkness in our world and lives, and brings light to it from within.  The kind of peace that recognizes that we are all human brothers and sisters and that we must find ways of not being afraid of each other, but of embracing each other – especially those most different from us.
This is what Christmas is all about, friends.  This is what incarnation is all about.  It is not just a fancy theological word we pull out around Christmas to dust off in order to sound, well, theological.  Incarnation is the way God works in the world.  Incarnation is the way of the cross.  Incarnation is a way of discipleship.

“If any want to become my followers, let them deny themselves and take up their cross and follow me. For those who want to save their life will lose it, and those who lose their life for my sake, and for the sake of the gospel, will save it…”  Mark 8:34-36

And suddenly there was with the angel a multitude of the heavenly host, praising God and saying: “Glory to God in the highest heaven, and on earth peace among those whom he favors!”  Luke 2:14 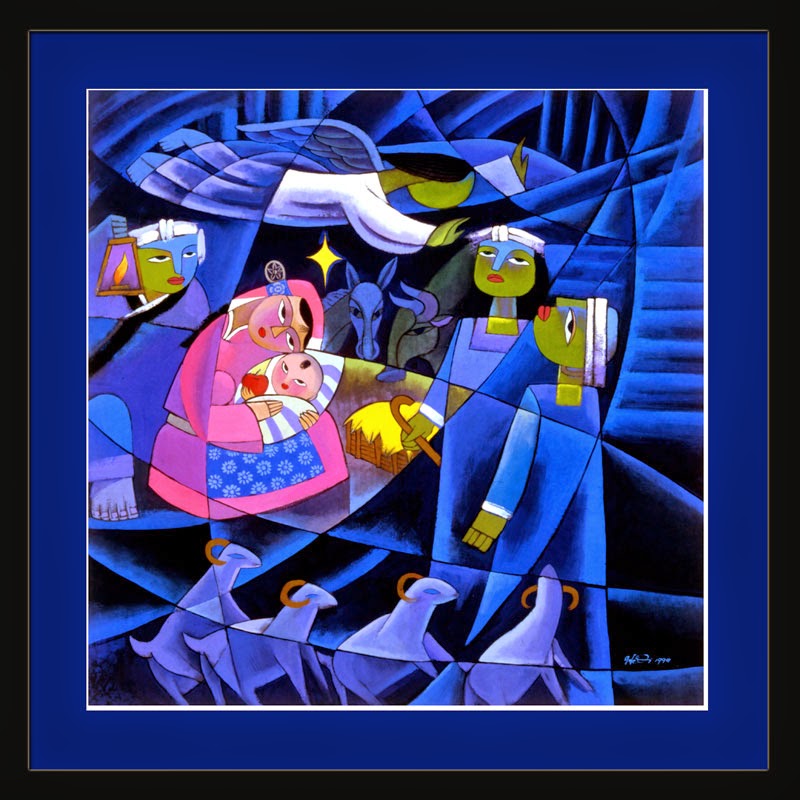 Posted by Pastor S. Blake Duncan at 10:15 AM No comments:

Read the text here: Luke 1:26-38
Blessed!
“Greetings, favored one! The Lord is with you.”
Mary must have been a pretty special girl, don’t you think?  To be favored and chosen by God to bear God’s Son, Jesus.  I wonder what she did to deserve such favor.  You would think that God might have had a list of qualifications that needed to be fulfilled for this job.  For example, I would think it would be important for her to have a good financial foundation, so that she could easily provide for the child; have resources, like other women available to assist her; she should be married so that there is no moral or ethical questions; she should be mature and able to handle the responsibility; she should be devout and strict in her religious observance, keeping the law perfectly; she should have a special relationship with God.  Can you think of other qualifications that we might expect for filling the position of the mother of the Son of God?  In fact several early Christian texts – that did not make it into the Bible – went out of their way to describe such a Mary: a woman who was so pure and holy that she was really only one step in holiness below her son.
But this is not the Mary we meet here in the Gospel of Luke.  Mary in the Gospels seems to be nothing special at all.  She is a poor peasant girl, perhaps as young as 13/14 and certainly no older than 17; she is unmarried at the time of the visit of the angel and there is nothing in the text to suggest that she was particularly devout or that she had any kind of special relationship with God.  She is just a normal, 1st century peasant girl, living in a small village, betrothed to an older man and probably (like all young women of this time) looking forward to her life as a wife and mother in this context with the expected mix of both fear and excitement. But she is favored by God!  She is chosen!  She is blessed!
There is, however, something very unique about Mary and it is this: when she is greeted by the angel and told that she is favored by God she accepts and believes it.  That seems pretty simple, but think about it.  All of the social and religious powers of the time were going out of their way to send the message that you – Mary – are not favored and not worthy.  As a woman, a peasant, a villager she would have had 2nd class status and then there was the matter of keeping the law and maintaining the purity regimen.  And on top of that she is going to get pregnant before she is married! How in the world could she ever believe that she was favored by God?
And what about us?  We live in a world of high expectations. Nothing comes free, we must always work to earn everything we have.  We believe that we get what we deserve and there are no free lunches.  We spend our lives trying to live up to expectations and acquiring and maintaining our qualifications.  We spend our lives trying to be worthy.  And we extend this to our relationship with God – if you want God to bless you then you have to…  Fill in the blank!
But on this 4th Sunday of Advent we pause to look at this young woman and marvel at her faith.  And her most important act of faith is simply accepting the angel’s greeting and believing that yes, she was favored and blessed by God, not for anything she had done or accomplished.  God’s favor and blessing come to her as a free, unconditional gift.  And believing this enabled her to accept everything else; accepting God’s unconditional favor and blessing empowers her and enables her to do incredible things.
This is true for us as well.  You are favored by God!  Can you believe it?  Do you know and believe that God notices you and loves you and this is completely on the basis of nothing you do, but only because of who you are.  You do not have to DO stuff in order to attract God’s notice and favor – rather God notices and favors you right now on the basis only of his unconditional love!
The most important thing about this text is not that it lifts up Mary as an exception but rather as an “example of what can happen when you believe that God notices, favors, and blesses you: you may just change the world!”1

Quote from "In the Meantime" by David Lose in his essay "Blessed Like Mary." 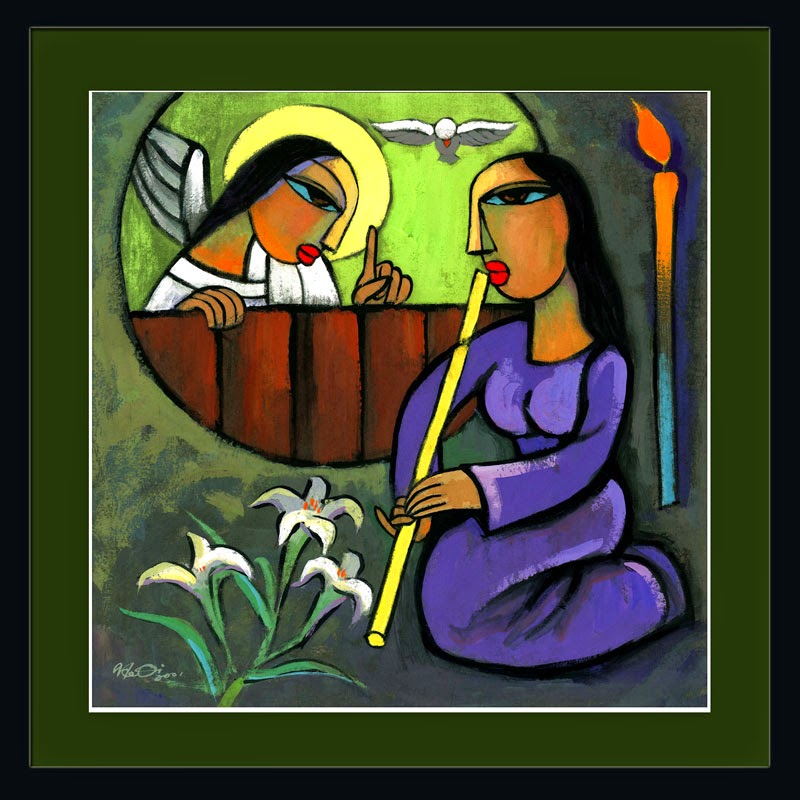 Posted by Pastor S. Blake Duncan at 2:23 PM No comments: