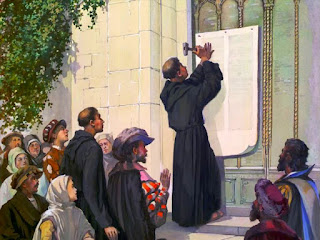 In October of 2017 we will reach the 500th anniversary of the event that began the series of events that led to the Reformation: Martin Luther’s nailing the 95 Theses for debate on the door of the castle church in Wittenberg, Saxony.  Lutherans of all varieties will be taking the opportunity this year to remember this day and celebrate the Reformation.  But I think there are some things we all should keep in mind.
First – The nailing event was only the first of a series of events that led to a permanent break between various German churches and Rome.  This was not Luther’s intent.  He did not set out to create a new church, he only wanted to call attention to what he felt were abuses and he hoped that the leadership would address these.  Was he cynical or naïve in this expectation?  It is a good question.  Power had corrupted the Roman church of the late Middle Ages so much that there would have been no realistic possibility that the church would have reformed itself, especially on the basis of some critiques by an obscure Augustinian monk from the backwaters of Northern Germany. Personally, I think Luther was sincere initially in hoping for debate and reform.  But it did not take long for him to give up this hope.
2nd – Luther had not been the first person to raise the concerns.  The Czech priest Jan Hus had raised many of the same issues. The church responded by inviting him to Rome for “discussions” and then had him arrested and executed – burned at the stake.  Luther would not make the same mistake.  And Luther was lucky to have as his prince the Elector Frederick the Wise, who protected him.  This protection was essential for Luther.  Without it he would have undoubtedly ended up tied to a stake in Rome like Hus.
3rd – Two other secondary things came together with this event and without either of them Luther’s protest would have probably fizzled.  1st, Luther made the curious decision to write these Theses (topics for debate) in German, the language that was spoken by the population, rather than in Latin which was the academic language for scholarship, writing and debate.  It is a curious decision.  The majority of the population could neither read nor write either German or Latin.  However, most of the students and certainly all of Luther’s colleagues certainly could and once these were posted and printed Luther’s Theses papered all of Northern Germany.  One can imagine students in the local taverns reading the document aloud to all of those who were assembled.  And this leads to important happenstance #2: the invention of the Printing Press in 1440 by Johannes Gutenberg.  Additionally the fact that there was a printer in Wittenberg and that they were looking for things to print was the other element here.  When Hus was burned at the stake in 1415 there was no printing press and most folks had little knowledge of what the Czech priest had written.  By 1517 everyone who wanted a copy had a copy and this even led to an interest in learning to read.
4th – There were others who are very, very important to the development and success of the Reformation: Philip Melanchthon is first and foremost.  This quiet and unassuming, brilliant scholar of Classical and Biblical Greek served as a calming influence, grounding the emotional and often irascible Luther.  Another favorite of mine was Frederick’s private secretary Georg Spalatin, who was also a priest, a Greek scholar, a lawyer and a humanist.  Like Melanchthon he was careful, methodical and organized.  He often found himself going between Luther and Elector Frederick.  And as upset as Luther sometimes got with Spalatin he nonetheless may very well owe his life to this brilliant man who was Frederick’s most trusted advisor.  I will confess that Spalatin is my favorite figure of the Reformation. Without Spalatin there may well have been no German Reformation in 1517. 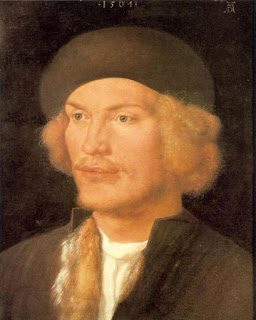 Georg Spalatin
5th – This is important.  Too often in the past celebrations of Reformation Sunday and Reformation anniversaries have become times to condemn Roman Catholicism - “We are glad we are not like them!” we say in so many ways.  And indeed much of what we do and do not do in worship and in other areas of ministry have been too often determined by doing the opposite of whatever we think is “Catholic.”  Lutherans in the past have even gone so far as the change the words of the Ecumenical Apostle’s Creed in order to avoid being “Catholic.”  (e.g. changing “I believe in the holy catholic church” to “holy Christian church,’ whatever that is!)  The time for such Catholic bashing and defining ourselves as anti-Catholic is over. First of all, the Roman Catholic Church of the 21st century under the Papacy of the wonderful Pope Francis is not the church of the late Middle Ages.  We have come a long way from those days and it is time we recognized that.  Also, Roman Catholics and Lutherans have made great progress in healing the medieval rifts.  Agreements on a variety of theological issues have been reached, most notably one on the doctrine of “Justification.”  Last fall the Pope himself joined with Lutherans for worship.  This is worth celebrating.
Do we agree on everything?  No.  Is that necessary?  I think not.  The fact is that we need each other and we need to join with each other to address some of the serious problems of our time.  Lutherans and Catholics and other protestant Christians all have the work of the Kingdom to do and this includes – addressing issues of systemic poverty and violence; reaching out, assisting and working to re-settle the masses of refugees; opposing injustice and working together to see that all people are respected no matter their cultural background, their race, skin color or even their creed.  Christians have an obligation to work in this manner.  Hate and exclusivism is never acceptable for a Christian and it is the work of Lutherans and Catholics and other Christians to boldly speak this word in the midst of our fractured, violent, exclusivist, greedy and hateful world.
And this is why the Reformation matters in 2017!  Our issues today are no longer the same issues of 1517, and we dare not pretend that they are.  Rather we have new issues to which the church universal (the church catholic) needs to address.  Being grounded and reminded of our Reformation heritage is one way to propel this work.  And to this end you can look for Reformation events throughout the year, both on the national, synod and local level.


During the season of Lent the Wartburg Parish Lenten series will focus on Luther’s Small Catechism.  We encourage you to come to the services and bring your copy.  We will have copies for you there if you don’t have one.  Why not also take the opportunity to review the Small Catechism by reading sections of it each day throughout Lent, even memorizing parts – like Luther’s magnificent explanation of the Apostle’s Creed.
Posted by Pastor S. Blake Duncan at 2:41 PM No comments: