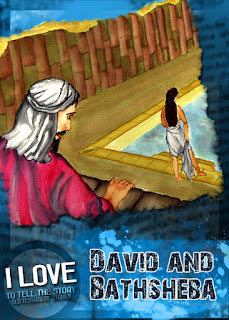 Thanks to Peace Lutheran Church is Sioux Falls, South Dakota for these wonderful graphics and permission to use them.
Posted by Pastor S. Blake Duncan at 2:42 PM No comments: 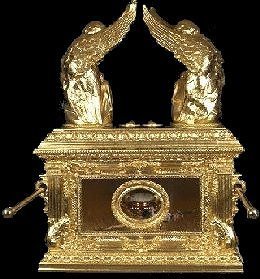 God Rains on David’s Parade!
In the movie, “Raiders of the Lost Ark,” the action-hero archaeologist Indiana Jones is attempting to locate the lost Ark of the Covenant and to get hold of it before the bad guys get it.  They hope to harness the power and glory of God to advance their evil plans.  Finally at the films climax, the evil Belloq, dressed in High Priestly regalia ceremoniously and victoriously opens the top of the Ark of the Covenant and unleashes the power and glory of the Lord, which promptly melts Belloq and his Nazi collaborators.  God’s glory will not be harnessed or used!
This is also a lesson that David needs to learn in our lesson for today.  David has finally been crowned King of all the united tribes of Israel. He has taken the city of Jerusalem and made it the capitol. Now, in a rather blatant ploy to consolidate his power, he determines to move the Ark of the Covenant to the new capitol.  Up to this point the Ark had been located and cared for in the village of Baale-judah by the priest Abiathar and his sons. But David figures that this move will further distinguish Jerusalem and his Kingship.  David wants everyone to understand that now God resides in Jerusalem, and if you want to experience the presence of God you need to travel to the capitol of the nation, the City of David, Jerusalem.  It is a great plan, except for one problem. God’s glory and presence will not be used in this way and David finds his plans thwarted by none other than God, Himself.
Now the Ark of the Covenant has been with the Israelites since their wandering in the wilderness.  It has served as a reminder of God’s covenant with Abraham and his descendants and God’s deliverance and presence with the people of Israel.  It also had become a locus for God’s presence and glory.  In other words, if you wanted to experience God’s presence, you need to simply approach the Ark. The Ark itself was even carried into battle with the army during the many skirmishes with the Philistines, and was even captured at one point, but then quickly returned.  The Ark itself was simply a rectangle box, which had been plated with gold.  On the top of the cover were two cherubim or angels that served like guards (see the picture in the insert).  Inside the Ark the stone tablets of Moses upon which the 10 commandants had been inscribed had been placed.  The New Testament book of Hebrews further claims that there was a container of Manna and Aaron’s staff.  The Ark became the focal point of the worship of Yahweh during this early period in the history of Israel.  Later, when King Solomon constructed the Temple, the Ark was placed in the Holy of Holies.  But it was subsequently destroyed when the Babylonians destroyed the city and Temple.
The use and transport of the Ark was carefully spelled out both by tradition and in the book of Leviticus.  For one thing, the Ark was to be carried whenever it was moved (see the poles in the picture)! But David ignores this and has a cart built to transport it.  And, tragically, in the process of moving, the cart almost tips over and one of Abinadab’s sons, Uzzah, reaches out to steady the Ark and then dies in the effort.  Why did Uzzah die?  He was just trying to help.  It seems rather unfair.  There are a lot of commentaries, which have spelled out all kinds of reasons for Uzzah’s death in a kind of “blame the victim” approach to interpretation. One gets the sense that these scholars and pastors are trying to defend God, and the only way to do that is to find something that Uzzah did wrong, even if unwittingly.  Well, God does not need to be defended!  Uzzah’s death is tragic and unfair.  But it was most likely not a death by lightening bolt that it has often been characterized as; God does not zap poor Uzzah!  Who knows.  It may rather have been a heart attack or the cart might even have crushed him.  It really doesn’t matter, because that is not the point.  The point of the story is to be found in David’s reaction.  David gets angry! God is ruining his plans.  David has ignored the usual protocol for transporting the Ark; David is attempting to manipulate God’s presence and glory by locating it in the “City of David.”  And when things don’t go right and someone is killed in the process of realizing his plans, David gets angry and throws a tantrum. God is raining on his parade!  And then his anger turns to fear.  And he decides to take a break for a little while.  So they park the Ark along the way at the home of an established supporter of David’s and leave it there for a while.


Finally David, now somewhat chastened, decides to complete the move of the Ark to Jerusalem and this he does with much celebration and music and dancing. One thing that I hope we all learn from this series is that David is not pure – he is a very flawed human being and in this part of the story his motives are mixed. He is trying to manipulate God in this move, but at the same time I also feel that his celebration and ecstatic dancing in praise to the Lord are sincere.  How often do we have mixed motives in any number of circumstances?  How often do we, like David, attempt to manipulate God, at the same time when we are sincerely expressing our praise and love and commitment to God?  How often do we get angry with God when God rains on our parade and things don’t go the way we hope or expect?  In this lesson we learn from David that is all a part of the human condition.  But also that “fear” – that is respect that leads to confession - is the way forward.  And this text calls us to look at ourselves and take stock of the ways in which we might be trying to manipulate God.  And then once we recognize this, to confess and to continue to praise God through word and deed.
There is much more to be said about this text, and I think I could easily create a sermon series out of this text alone.  So allow me to briefly share a couple of other important lessons that emerge from this text.
1. Not everyone is thrilled by this event.  David’s wife, Michel, is offended, hurt and angry by the display, which she considers undignified and downright sordid!  Sometimes she is unfairly presented as the nagging wife.  But it is important to see that that characterization is completely unfair and unsupported by the text.  Remember, Michel is the only daughter of King Saul, and the only remaining member of that household.  David’s moving the Ark to Jerusalem and his celebration is a celebration that now he is King and her father is not! Not only that but none of her brothers are King; and neither is her young nephew.  They are all dead. All killed violently. This entire sequence is probably extremely painful for her.  And David is just downright cruel to her. Remember, that she had played an important part in David’s very survival, but now is cast aside cruelly.  And that is not all, The Court Historian is very clear to note that she is barren and has no children. This is not necessarily as punishment as much as this note is placed there to make sure the readers understand that the bloodline of King Saul has now ended!  There can be no pretenders to the throne!

2. David was successful in centering the worship of Yahweh in Jerusalem.  If one wanted to experience God’s presence and glory then one needed to make a pilgrimage to Jerusalem.  In the Gospel of Mark (15:38 – pew bibles NT p. 41) the curtain of the temple is ripped in two at the moment of Jesus’ death. This symbolizes that God ‘s glory is now to be found on the cross and God’s presence can no longer be contained in one place, but rather God is present everywhere with God’s people: in their communities, in their worship, in their sprinkling with water and sharing the bread and wine, and in their reaching out to others.  We still try to domesticate God, put God on our side and put conditions on experiencing God.  But this lesson reminds us that we cannot harness, use or domesticate God; that God’s power and glory is beyond each of us, and it is also available to each of us.  In water, bread and wine; and in acts of caring and mercy and love of others God’s glory is made manifest in profound and glorious ways!


So let us celebrate!  Let us dance with praise before the Lord – for as the great Sufi poet Hafiz counseled – “Cast all of your votes for dancing!” 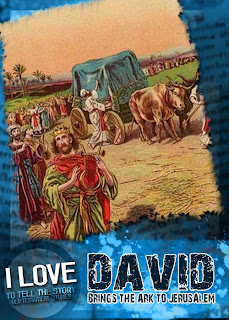 Thanks to Peace Lutheran Church is Sioux Falls, South Dakota for these wonderful graphics and permission to use them.
Posted by Pastor S. Blake Duncan at 8:33 PM 1 comment: 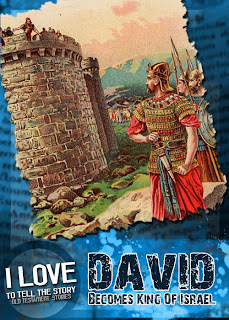 Thanks to Peace Lutheran Church is Sioux Falls, South Dakota for these wonderful graphics and permission to use them.
Quote from workingpreacher.com commentary by Dr. Ralph W. Klein - http://www.workingpreacher.org/preaching.aspx?lect_date=7/5/2009&tab=2

Posted by Pastor S. Blake Duncan at 3:13 PM No comments: