This year for a series of sermons for Advent I have decided to take the suggestion of Dr. Barbara Lundblad and focus on the images which come out of the Isaiah texts for the season in year A.  Her suggestion is offered in this article found on the Working Preacher website: 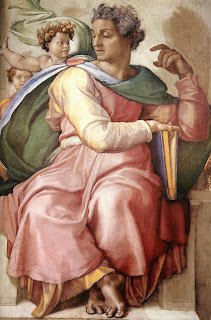 Images of the Kingdom: The Plow
Last weekend we celebrated the Feast of Christ the King on the last Sunday of our church year and this week for the 1st Sunday in the new church year we focus on the Kingdom of God over which Christ is King.  Understanding the Kingdom of God often leads to as much confusion as understanding what it means that Christ is King.  Last week we talked about how Jesus upsets our usual understandings of Kingship – instead of a golden crown, Jesus wears a crown of thorns; instead of a magnificent throne, Jesus is enthroned on a cross; instead of beautiful robes and possessions, Jesus is stripped of everything he has.  Jesus, our King, replaces strength with perfect weakness; words of condemnation and judgment are replaced with words of forgiveness; the Kingly tactic of terror and fear is replaced with love and grace.  Jesus is not a usual kind of King; Jesus is not the kind of King we (or the disciples) expect; Jesus turns the notion of kingship upside down.
We need to bear this in mind as we consider the Kingdom of God.  The Gospels are quite clear that this is the focus of Jesus’ life and work - proclaiming that the Kingdom of God has come into the world in Jesus.  Consequently, the Kingdom has come NOW, ALREADY.  The Kingdom is not some far away, unearthly heavenly destination for the future – the KINGDOM of GOD is NOW, in our midst.  At the same time it has NOT YET come in its fullness.  Which simply means there is work to do for those of us who are called to be Disciples of Christ.  So as we enter into this Advent season we are again reminded of our calling to recognize “the Kingdom come” into our midst, and to be workers of the Kingdom allowing God to work through us to continue to bring the Kingdom into our midst in even more fullness.
For the four weeks of Advent, the prophet Isaiah will proclaim the coming of the Kingdom, but he does it in a peculiar way.  Our text begins with these words:
“The word that Isaiah, son of Amoz, saw concerning Judah and Jerusalem.”
Yes, you read it right. Isaiah SAW the word of the Lord and was compelled to speak on the basis of what he saw.  We always expect to HEAR, but Isaiah sees the word.  And what exactly does he see? He sees God working to bring healing out of suffering, peace (Shalom) from violence, love and grace from hatred and terror.  And let’s be clear – while Isaiah is speaking specifically to the people and rulers of his own time, he is also speaking to us.  We need to read these texts as a contemporary commentary on us, on our society, and on our priorities.  Let’s start with a few verses before the passage that is our reading for today.  In chapter 1, the prophet speaks:
Your country lies desolate, your cities are burned with fire…
And daughter Zion is left like a booth in a vineyard, like a shelter in a cucumber field, like a besieged city… Everyone loves a bribe and runs after gifts…
They do not defend the orphan, and the widow’s cause does not come before them.

Does this sound familiar?  It should – cities burned with fire (like Benghazi perhaps); helpless people abandoned in a besieged city (like in Aleppo in Syria?); political leaders and others running after gifts and bribes and power and authority, while leaving the poor and needy and children to starve.  This is the word of the prophet spoken to us!  Especially those of us who claim to follow Jesus and those of us who are comfortable.  We have a responsibility.  God is calling you to be a worker in the Kingdom.

And so, before our eyes the prophet Isaiah places an image today, so that you and I might also SEE the word of the Lord. And the image for this opening proclamation is a plow.
… and they shall beat their swords into plowshares, and their spears into pruning hooks; nation shall not lift up sword against nation, neither shall they learn war anymore.
Why a plow? A plow is used for tilling the field so that crops can be planted and people can be fed.  What the prophet sees in this vision of the Kingdom is the replacement of violence with peace and the eradication of hunger.  But, this isn’t practical, right?  It will never happen.  It is a dream!  No – it is a promise – it is the vision of the Kingdom of God that is proclaimed by the ancient prophets and also proclaimed by none other than our Lord Jesus.  And it will come to be in time.  But in the meantime, during this time of already but not yet, it is for us a promise and also, for us a calling.

The plow then is a symbol of the promise of the Kingdom come, where hunger and violence will be no more, where greed will not determine policy and where fear will not be used as a tool of manipulation; but it is also a symbol of our calling – of your calling and my calling as Christians to be Kingdom workers, doing everything we can to eliminate violence, to eradicate hunger, to turn our backs on greed and to stand up to fear.

For, in the words of St. Paul: … The night is far gone, the day is at hand, put off therefore the works of darkness and put on the whole armor of light … put on Jesus Christ…  Be workers of the Kingdom, working to bring the vision of the plow, working to being Peace, Shalom and plenty to this world that God loves so much that God has established the Kingdom right here, in our midst. 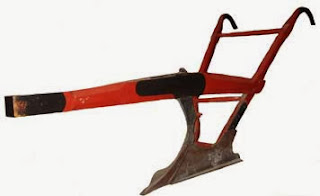 Posted by Pastor S. Blake Duncan at 1:35 PM No comments:


“The Hollow Crown”
The title of this sermon is taken from a line from Shakespeare’s Richard II.  If there was ever a writer who explored the nature of kingship it was certainly William Shakespeare.  But these plays, and the history upon which they are based, are not exclusively stories of glory and celebration.  They are in fact mostly dark and difficult stories about the abuse of power and the very human limitations of the individual kings (and queens) themselves.  They are stories about the lust for power; that is, the overwhelming desire to be king, no matter what.  In many respects the stories of the kings and queens in history are like a mirror, for if we look at them carefully we can see ourselves reflected back.  For like the famous kings and queens of old, we too want to be the sovereign of our lives and we will jealously hold on to this power and entitlement no matter what.
What are some of the characteristics of the kings and queens that we can pull out of these stories of the kings and queens of old?  Here is a list: An overwhelming desire for power; and, along with it, an overwhelming desire to command others and have others acknowledge this power; the need to give favors, and to receive special treatment – and conversely, the ability to withhold favors; the desire for glory and acclamation.  In short – we like to be in charge, we like to have others fawn over us, we like to have others do what we tell them to do, and we like to not have to be accountable.  So, we can say, “It is good to be king or queen!” But there is a dark side that we don’t often think about it.  In order to hold this position we sometimes have to step on others and bring hurt and pain to others.  And no matter how secure we think we are, deep down we know that there are others who are seeking to undermine and take away our power.  This should all sound familiar – because what I am describing is nothing less than original sin: the drive to be the center of our own universe and have everything and everyone else orbit around us.
The Gospel text for this festival is a portion of the crucifixion from the Gospel of Luke.  And it is important to be reminded that the description of kingship above is pretty universal.  This in fact was what the people in Jesus’ day were looking for in their King, in their Messiah: a powerful, mighty warrior who would claim kingship and establish a kingdom by force, if necessary.  They expected their king to be someone who would destroy anyone who stood against him.  But what do we see in Jesus?  Jesus enthroned on a cross; a crown of thorns on his head; a robe which is stripped and taken away.  We see a King who in his dying breath offers a word of forgiveness and who promises salvation to the bandit on the cross next to his.  What kind of king is this?  Crucifixion, weakness, suffering, death!?!  This is not the kind of king we expect!  This is not even the kind of king we think we want!  But this is the King whom God has graciously given to us, because this is the King we need!
And this is the King to whom we look for guidance and direction.  If you want a full and abundant life then, Jesus says, you need to pick up your cross and follow him.  And this includes looking in that mirror and seeing your own lust for power and privilege, see your own pursuit of your self-centered desires, see how you treat others who you feel have gotten in your way in some form or another.  See all of this - look at yourselves honestly and then ask for forgiveness and hear the word of forgiveness from the cross.  And then with the aid of the Holy Spirit, ask God to allow you to move forward in your life, offering forgiveness to others and living a life that reflects God’s overwhelming love and grace.  This is what it means to be a disciple of the King – to step aside and acknowledge that Christ is the King of our world and of our lives. 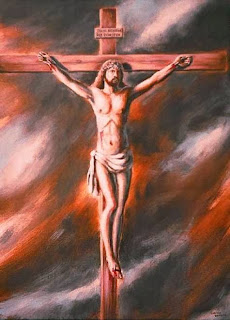 Posted by Pastor S. Blake Duncan at 9:07 AM No comments: 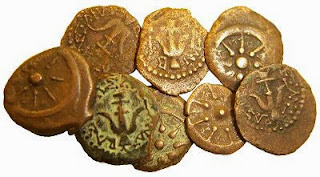 Posted by Pastor S. Blake Duncan at 9:17 AM No comments: