And when eight days were accomplished for the circumcising of the child, his name was called JESUS, which was so named of the angel before he was conceived in the womb.

Jesus’ name was given to Mary by the Angel during he annunciation.  We sometimes put Jesus together with Christ as though Christ was his last name.  But Christ is not a name – it is a title.  Christos is the Greek form of the Hebrew word Messiah.  And in the New Testament when the title is used it always appears with an article: Jesus THE Christ.  Jesus’ name is simply Jesus and to that occasionally he is identified as Jesus, son of Joseph or Jesus of Nazareth for his home town.

The name Jesus itself was a common name at that time and in some places in the world today it still is.  Jesus is actually the Greek form of the Hebrew name Joshua.  And the name Jesus/Joshua means God saves or God is our Salvation.  Choosing the name Jesus/Joshua was no accident.  Who is the other important Joshua from the bible?  Well, when the children of Israel have concluded their wanderings in the desert and they are poised to enter into the promised land, Moses hands over command to his young protégé Joshua, and Joshua leads the invasion into Canaan.  The name Joshua/Jesus would have been associated with the promise of God’s deliverance; with the taking of the Holy Land and self-determination.  It would have been associated with military power, strength, strategic brilliance and so forth.  This is of course what the people of 1st century Palestine were expecting God to send – a military Messiah – like the 1st Joshua who would organize and unify the nation of Israel and drive the Romans out of the land.

Well, God sent Joshua – just not the Joshua they were expecting.  This Joshua/Jesus is non-violent; he cares for all people – even Romans and Samaritans and non-Jews.  Through this Joshua/Jesus, God saves by reaching out in love and grace especially to the weak and the lost, to the poor and the forgotten.  Jesus is God incarnate come into our broken world to redeem it from within. Jesus means God saves and that God is with us, no matter what. God is no longer hidden. God saves through Jesus.

The name of Jesus is your name, too, given to you at your baptism, carried by you in your words and actions, bringing you to eternal life. It is the name that goes with you everywhere.  And so, on this New Year's day – the first day of a new decade, we look ahead to what the name of Jesus calls us to be – the risks we can take, the support we can share, the resources we can give and the ministry we can do.

In the name of Jesus + 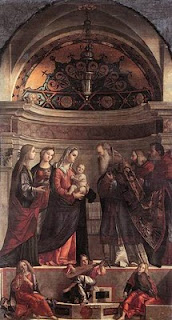